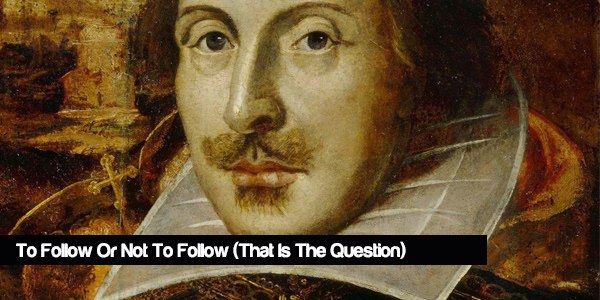 While scanning through twitter yesterday I was drawn to a new post on Enstine Muki’s blog titled ‘Backlinks can ruin your SEO‘. In a nutshell the post is about being careful: –

Sounds sensible right? Well, unfortunately there is a problem with the message here and this passage in particular was something I felt I had to respond to: –

The danger is not only with dofollow links pointing to your blog. As a matter of fact, one of the things Google will kick you for is when you dofollow your external links.  Well, that doesn’t mean a few dofollow external links will attract penalties but if Google thinks that you are selling those links, be ready for a hard knock on your cranium.

It’s recommended to strictly regulate the links you give out. Don’t just dish out dofollow as this is like preparing a hot seat for your “behind”.

So what’s the problem?

Well, let’s dig into the nofollow attribute a bit and find out why (in my opinion) advice like this is a misunderstanding of the purpose of the attribute and a potential problem for the citational link based model of ranking web pages.

The Beginnings Of Nofollow

Back in the mid 2000s, commenting on blogs was seen as an easy way to build up links to your site (thereby increasing it’s search rankings) and the practice was being abused on an industrial scale.

To maintain the quality of search results something had to be done and in early 2005 google’s Matt Cutts and Blogger’s Jason Shellen proposed the introduction of a new attribute (rel=nofollow) which could be used by search engines as an instruction: –

Use of the new attribute was widely adopted by most  popular blogging software and google and the other major search engines updated their algorithms accordingly.

As part of google’s continued battle against manipulative linkbuilding, they decided to expand the use of nofollow and decreed that paid links (including links in sponsored posts and adverts) should have the attribute applied.

The penalty for not adhering to this (if you were caught) would be a manual penalty and a reduction in the seller’s pagerank.

The attribute could also be used as a general “I’m not vouching for this site” flag and applied to any link at the discretion of the webmaster.

When Should The Nofollow Attribute Be Applied

Any user generated content should (generally) have the nofollow attribute addedto external links. Examples would be: –

As this content  is not under the direct editorial control of the webmaster it is correct to apply the attribute to any external links as they cannot be vouched for.

Don’t You Trust Yourself?

We now come round to my problem with Enstine’s post and the way many people are now looking at links.

Enstine is correct to state that nofollow should be applied to paid links – that is one of the attributes primary purposes.

Beyond that though, if you are linking out from within content which is under your direct editorial control, then you should not be adding nofollow to those links. Basically that’s like saying to google ‘I don’t trust myself!’.

The citational link based model of ranking web pages is still a good one, but it will cease to be as effective if we all start nofollowing everything. That’s not what the attribute is for.

I’ve seen a lot of confusion about this and a fear of linking out spreading over the last couple of years due to horror stories of penalties and google slaps. Believe me these penalties do not come from a couple of followed external links.

Far from being a thing to avoid, in my opinion (and experience) linking out freely to quality, related sites in your niche will help your rankings.

One area which is a little grey is guest posting.

MyBlogGuest’s recent hammering has resulted in many worried webmasters adding the nofollow attribute to external links contained in guest posts.

For me the issue here is again one of editorial control.

If you are just publishing guest posts willy nilly then you should either stop doing that (ideally) or yes, add nofollow to the links.

If however you publish the occasional guest post and have strong editorial and quality guidelines then I don’t think it’s something you need to worry about.

Google’s problem is with low quality guest posting as a scaleable link building tactic, not the practice of guest posting itself.

You can read my guidelines for guest blogging in 2014 for more on this.

There’s No Such Thing As Rel=Dofollow

Links are followed by default and there is no such thing as a rel=dofollow so you don’t need to add that anywhere . You would be as well adding a rel=goldfish attribute.

What do you think of Enstine’s post? Do you agree with my opinion on the misuse of the attribute, or do you think it’s safer just to nofollow everything? Let me know by dropping a comment below!

I agree with you completely. You should only be using nofollow on paid links (which is another story) or with user generated content.

Linking out to relevant, quality content is at the core of good blogging. It is sad that we are at the point of shying away from sharing good info just to please the search engines.

If you are confident about the sites that you are linking to then IMHO you shouldn’t have to worry.

But this topic does raise issues with things like the commentluv plugin ( which I see that you use) and affiliate links. What are your thoughts on those?

Hi Neena,
Commentluv has the nofollow option so I think many owners are looking this direction.

The best option for affiliate link is use a link shortener and nofollow them. An option too is to use the robot.txt file with instructions to search engines not to index those shortened link.

Absolutely Neena – when it comes to penalties people often can’t see the wood for the trees. They are concerned with one or two outbound links, when there are 1,000 spammy links pointing back to them.

Affiliate links should always be nofollow (it’s a paid link) or passed through a redirect, which as Enstine says you can block with robots.txt. Personally I do both.

With regards to commentluv, I nofollow those links as they are not under my direct editorial control. Technically I guess I could visit each link and make an assessment… but I think that’s going a bit over the top!

Hey David,
It’s a happy weekend! I’m glad to see this response that opens up an interesting debate.

Here is what you said that raised my ears;

if you are linking out from within content which is under your direct editorial control, then you should not be adding nofollow to those links

I totally don’t recommend this. You still have to regulate those links. Now look at this scenario …

You came across a plugin or some product you think can really help your readers and you decide to write about and link to it (not with any affiliate link). You were not paid for the link at all but you feel this is good and helpful stuff for your readers. Mind you, if you don’t nofollow this link, once those guys at Google stumble on such article, it will be hard to convince them you weren’t paid. I think this calls for caution.

Here is my take…
Not every unpaid outbound link within my editorial control should be dofollow. From my content, I can link to any page for any reason other than money and Google may not understand this.

If you are linking to a publication on nytimes or cnn, or any trusted content site, I’m sure Google’s manual action will not hold you for selling links to cnn.

I still think when you are linking out from content, if you are not sure how Google will take it (that doesn’t mean you don’t trust yourself), add the nofollow tag.

Thanks for expanding Enstine. To be honest though, I stand by my thoughts on this and feel that this is a bit of an over sensitiveness about the whole thing. I have helped numerous sites to recover from penalties and pretty much all the time it’s due to what’s going on offsite (i.e. bad link profiles). The rest of the time it’s down to either over-optimisation or duplicate/thin content. Also, 99% of the time it’s pretty obvious what is wrong. If there is a big pattern of linking out to spammy/off topic sites then there may be an issue (as there should be!), but when we start worrying about editorially given links on the micro level then it’s time to pack up and go home. If a plugin is good value and worthy of a link then link to it.

Well, after reading and listening to all parties, I believe if you’re just going about your normal business of the day, and putting value in the face of people, been honest in things you do – you have nothing to worry about.

Except that you want to jump from 2 to 8, then you might have a case with Google.
Thanks Enstine for sharing this link in your comment on kingged, and thanks David for putting more lights into this issue.

Thanks for your comment Shamsudeen. As long as you are not trying to be manipulative you should have nothing to worry about.

Already read Enstine post about the blacklinks. Well I think google can easily point out paid links so I think their is no use of do-follow backlinks. Some of my blogs has been penalized and the reason I think is backlinks. As a results the traffic of those backlinks has suddenly dropped.

Its hard to disavow them!

Most of the time when it comes to penalties, backlink profiles are the problem

Just yesterday, I had been through Enstine’s post and left my views there. Man, the news of Google meting out manual penalties has got the better of me! I’ve been adding the nofollow attribute to all outbound links from my blog to other sources.

Earlier, I was like Good Guy Greg, giving out dofollow links to other relevant sources to which I linked out. But the sight of Google meting out manual penalties to innocent sites and blogs has really got me concerned.

At the same time, I make it a point to give dofollow links to relevant content within my editorial power. Good to know that I’ve been doing it right all this time.

I found the link to this post on Kingged.

Thank you for clarifying an incredibly confusing subject for the non SEO types such as myself.

Unfortunately in far too many instances (what I’ve been experiencing lately anyway) whenever marketers attempt to share any specialized information on this particular subject, it’s often so they can market some push of a button piece of software solution.

Rarely if ever, is it strictly to inform and educate, as your excellent post has done.Although truth told, I really don’t go looking (researching) this type of content, if I can help it!

But since I follow Enstine’s excellent instructions, it’s nice to be exposed to another qualified expert’s point of view!

No problem Mark, glad you find the post useful.