Back in the summer of 2013 I posted a detailed article about how I had grown the traffic/income of a new affiliate site over a 6 month period. The article covered the period of June 2012 to December 2012 and in that period the site grew from $115 a month (June) to $3834 in the month of December.

So, one year on how is my niche site performing?

I am pleased to say that there was a healthy increase, with traffic up by 40%. Here is a grab from google analytics, which compares December 2013 to December 2012. 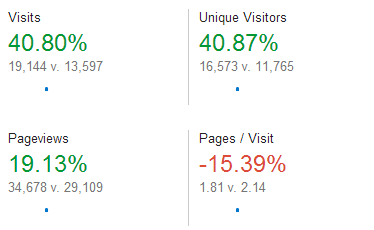 Here is a breakdown of where that traffic came from, with organic google traffic by far the biggest source. 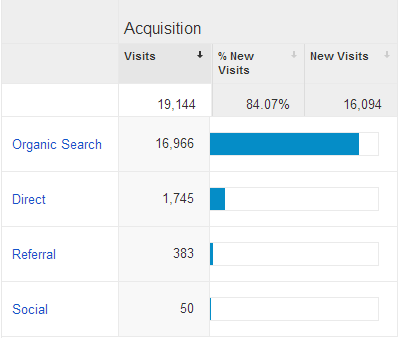 So, a very strong increase in traffic. Did that result in increased sales?

Did it work out this way?

If traffic was up by 40% why was income down?

Here are some of the factors that may have contributed to the stagnation in revenue.

Conversion rate on Affiliate Window was broadly the same as 2012 (around 9%), so the increased clickthroughs lead to increased commissions.

The manufacturer was pretty aggressive in 2013, with a clear aim of increasing their direct sales to end users (they do not offer an affiliate program).

They had a number of competitive offers on their own site throughout the Christmas period, which would have affected other online retailers (and thereby my commissions).

Probably as a consequence of this aggressiveness, pricing on the products was all over the place in the run up to Christmas. The site uses my own custom price comparison engine and I currently update the prices manually in the database each day (which takes me around 5 minutes).

Normally this would be fine, but this year an offer would go on in the morning and then be changed in the afternoon as the merchants battled for share. This is probably one of the main reasons for the drop in conversion rate.

I will probably change to an automated way of picking up pricing, but the problem is that offers often have addons (i.e. free delivery, free additional product etc), which makes this a little less straight forward.

My Own Failure To Capitalise!

Notwithstanding the above, I am pretty sure that a big part of the stagnation in sales was due to my own lack of input into the site.

While it is ticking away nicely and continues to bring in solid revenue, I have kind of put it on the backburner as I concentrate on other projects. In reality I probably spent about 10-15 hours working on it in December 2013 (which makes the income a pretty decent hourly rate!).

I am pretty sure I could have doubled the revenues if I had been giving the site proper attention (social media promotion, seasonal content, on the ball with pricing/offer updates etc).

So, a combination of the above meant that I was, in many ways running to stand still.

Now let’s take a look the methods I used to grow the traffic back in 2012 and ask whether they still work in 2014.

How Did I Grow The Traffic?

First, a quick recap on how I initially grew the traffic back in 2012.

Here is a screen grab from google analytics showing June to December 2012.

For the full detail on how I achieved this increase you can read the original post, but here is my method in a nutshell: –

I wrote up the most detailed reviews available for each of the products (most of them running to around 2,000 words).

I wrote up detailed ‘how to guides’ and answered common questions related to the products.

Again, these were highly detailed, authoritative and the best on the net.

I built links to the site through a combination of: –

I didn’t go crazy on link building, just built enough to get some initial authority/traffic and then started to attract natural links through the quality of my content.

So, does this method of growing traffic still work in 2014?

Well, the answer is a resounding yes! More than ever in fact.

As mentioned above, I didn’t do a huge amount of direct work on the site in 2013, but the hard work I had put in previously to creating high quality content continued to be rewarded. The rolling out of google Hummingbird in late August 2013 was particularly kind to me.

Here is a screen grab of analytics from August 2013 (which is a pretty quiet month for the site), showing the increase in traffic post hummingbird: –

Hummingbird was great for those who put the time in to creating high quality, detailed content.

Building For The Long Term

White hat SEO in a nutshell is: –

I put a lot of time and effort into creating a valuable resource, which wasn’t just a ‘doorway page’. Most of the content was evergreen and is still relevant – and when things changed I updated accordingly.

I did 0 proactive link building in 2013, but my site continued to attract editorial links due to the quality of my content.

The site was a genuine source of good residual income last year (well say an average of 8-10 hours work per month), but it didn’t magically get there.

If you want long term success (and ongoing residual income), then initial hard work and white hat SEO is the only way to go!

The site continues to dominate in the niche, but things can quickly change. I intend going back to the site in the Spring and creating some high quality fresh content and thereafter maintaining a regular posting schedule (perhaps 2/3 detailed articles a month).

If you have any questions regarding affiliate marketing/white hat SEO, or the methods I used to grow this niche affiliate site then please leave a comment below or contact me.

I also offer consultancy services in both SEO and affiliate marketing and would be delighted to assist you with growing your own site, whether it is a startup or established business.

Sign up by email below for my free affiliate marketing and white hat SEO tips straight to your inbox!

Good to see your website is performing better (in terms of traffic) than last year. From the amount of organic traffic, I assume your rankings are still holding up!

And the site redesign looks good. *Thumbs up*

I downloaded and read your pdf. At the end you write “Oh and please pop onto the site and leave a comment too :-)”, but you don’t give the URL. Just wondering. Thanks for all the insights.

good point… will sort that out!

So how much are you making now in 2014? and thanks dude im really inspired now. im 14 and im thinking if i start now at something i will get to ur level in 4 years.

Hi David
I’m retired and badly in need of making some money to pay my mortgage.
I have tried doing associate selling but lost a lot of money as I just cant understand how to get this to work for me. I find the jargon hard to understand too. But I need to earn some money and as soon as possible. I need your help to help me start paying my mortgage before its too late (you know what I mean). Please help me.

Hi Bob, drop me an email to [email protected] and I’ll see what I can do to help.

Wow! You’re killing it on the Amazon sales. I’m trying to get up to that level, and it’s coming along, slowly but surely. Being patient is tough though.

Hey Jackie, takes time and hard work, but you’ll get there. Niche selection is key.

Hi David, This is one of the most informative and sincere websites I have come across regarding affiliate marketing. I was wondering if you have a favorite or recommended wordpress format to use?

Thank you for your helpful article, both the original and the follow up; I’ve taken extensive notes, and will further be contacting you regarding the consultancy for affiliate!