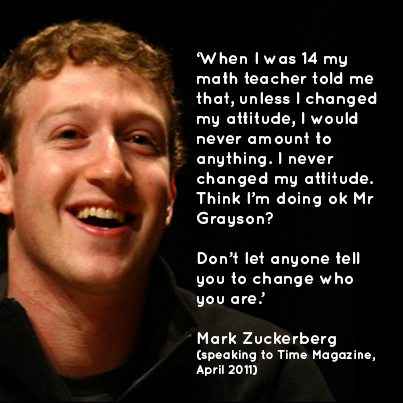 Don’t let anyone tell you to change who you are.’

Great quote right and wise words from the king of social networking himself. Only one problem…

Mark Zuckerberg didn’t actually say this… In fact, I’ve no idea if he even gave an interview to Time Magazine in April 2011 and he certainly didn’t have a teacher called Mr Grayson.

Using quotes in marketing is a very popular tactic for creating viral content, which works particularly well in social media. You probably see them all the time on your facebook page – those pictures of John Lennon or Amy Winehouse with wonderful, motivational quotes, that you just can’t help but liking and sharing.

But if you ever actually look into what you are liking (a quick google search of the quote normally does the trick), you will find that a lot of the time the person in the picture never actually said the words associated with them and they are either: –

a) A quote from someone else, or
b) Just completely made up like mine was!

We’re All The Same Really

Delving into psychology for a second (well ok, skimming at the edges…) you will notice a pattern to the types of quote that are successful. Things like ‘never change who you are’, ‘don’t let anyone tell you you’re not amazing’, ‘you can be whoever you want to be’ always go down well. People like to be told that it’s ok to be who they are (and I’m not saying it isn’t) with all their little idiosyncrasies – and when their heroes reaffirm that belief, they won’t be able to click like quick enough.

It’s a bit like how astrology works. Sorry if you are someone who believes in that, I don’t wish to offend, but it is, well, a load of nonsense. Everyone thinks they are different, but when it comes to it we’re all kind of the same really and we see things as speaking directly to us, when in fact they could apply to anyone.

Without going too far off topic and at the risk of sounding like Bob Geldof, it’s the very fact we are all so similar that makes it so sad that we just can’t all get along. Make tea not war. 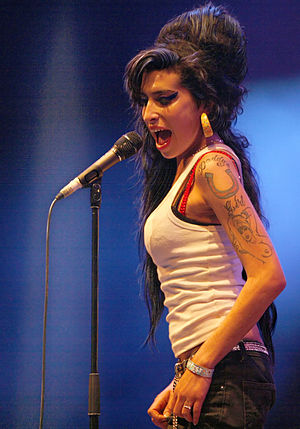 Amy Winehouse at the Eurockéennes of 2007 (Photo credit: Wikipedia)

So What’s The Problem?

Is there any real issue with people making up quotes and attributing them to celebs?

Probably not, although I do think it’s a little disrespectful to celebrities that are no longer with us. Fake quotes attributed to dead celebrities always seem to do particularly well (why I mentioned Lennon and Winehouse above) and I just feel this is pushing the moral boundaries a bit.

And if you are trying to build up trust from your audience (success is all about trust these days), do you really want to be giving them incorrect information?

I posted my fake Mark Zuckerberg quote up onto facebook this afternoon as an experiment to see how many likes/shares it generates. Will update this page in a week or so with the results. If you want to help the experiment, you will find the post on our facebook page here, so give it a share!

There’s no doubt that marketing with quotes is perfect for social media and the right celebrity and quote can quickly go viral. I think it’s a great tactic, but if you are going to use it yourself, then take the time to find a genuine quote. There are so many amazing quotes to choose from (http://www.brainyquote.com/ is a great resource) that you should never need to use fake ones. Ann Smarty from Internet Marketing Ninjas wrote an excellent article on the subject here, which explains how to do it right.

So, the next time you see a quote pop up on your timeline you might want to consider whether the quote is genuine before clicking on like.

Hi David, you certainly have a knack for presenting your material in a lighthearted fashion. But your point is spot on — we should always check our sources, whether they are quotes, statistics, or anything else.

So true, David. I’ve had the same issue come up with people attributing quotes to the wrong person.

I’d also say you should make sure you have a good image that you have the right to use, if you’re creating visual elements from quotes.

Which reminds me… forgot to put in the flickr CC commons attribution link for that image! Better get that fixed this afternoon.

As you said, great way to create hype in social media and it can get you some traffic. I think most people are not aware that this even happens and take every quote next to a popular face at face value. Checking the sources of presented content is the smart thing to do.

damn, I just made a comment but that math problem got me. You should get Commentluv advanced or whatever it’s called. It’s miles easier. I had a whole thing wrote out but, i’ll sum it up. “Be yourself” – Scott Craighead

Man ! Thought of sharing that Mark Zuckerberg’s image at one point ! Anyways , you’ve explained the logic very well .I’ve been on many websites that explained the Viral Marketing technique ,the way you presented the article with an example is better than almost all the articles I’ve read so far.

Thanks mate. Haha, yeah… I thought it was a good quote actually. Shame he didn’t say it!

Thanks for sharing this. Actually, I really love the humor! In fact, that’s very true especially with what you had just stated clearly above.

Really good insight on the matetr especialyl with quotes. Had not thought that the quote could be wrong! Haha!

Thanks for sharing this.

It’s really Nice seeing this, Photos and then Quotes, even when used alone are powerful, not talking of using both.
I’d prefer using photos of the dead anyway, coz with my quotes I don’t wanna give too much credits to existing celebs that can totally change to something bad on the long run. 😉

In Most of the Hype news in social Media i have come across news where there is always a Math Teacher or Math Genius is involved , not sure why always use a MATH word to make our point. 🙂

I’ve seen incorrect quoting go on all the time and the majority of it is from Twitter users, they tweet out endless quotes, no idea why!, but some of them are just so obviously wrong that I wonder where they get the info from!!